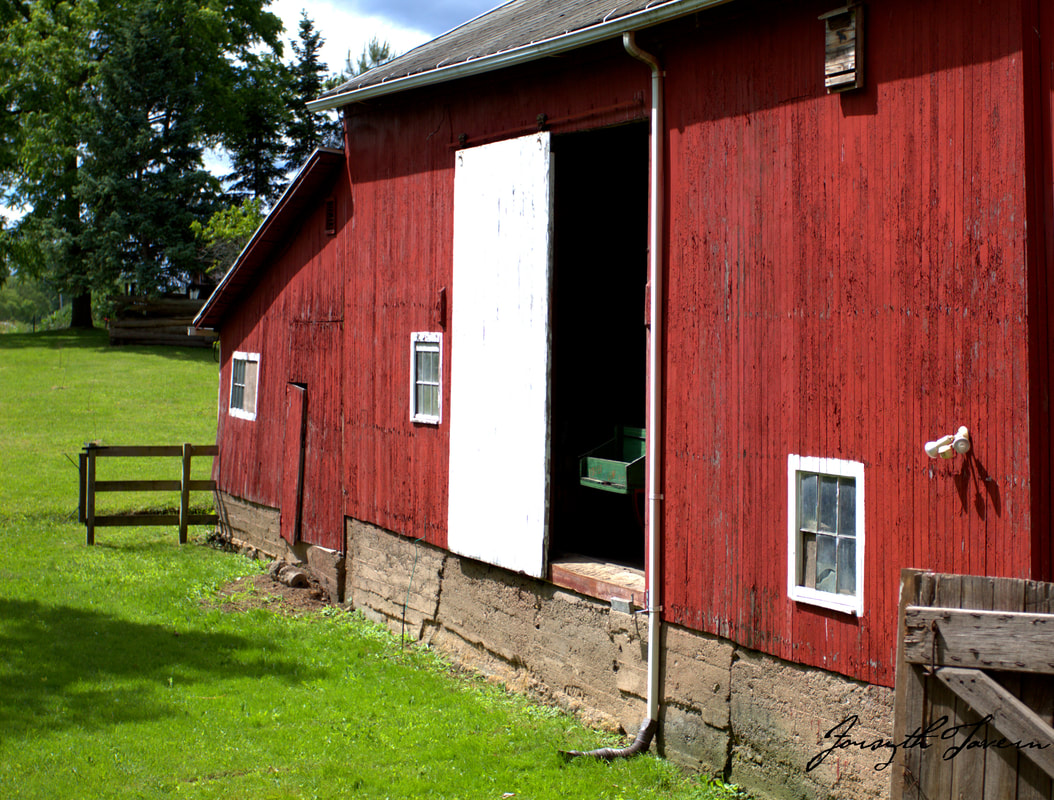 This barn was constructed to care for the animals of the Tavern's guests. In addition to buying lodging and sustenance at the Tavern, travelers also had to purchase lodging and sustenance for the various animals that they brought with them.
For most families, this meant their horses and or mules who were carting their homesteading supplies but for some it also meant cows, chickens pigs and any other livestock that they would need as they settled the frontier.

In 1812, however, tragedy struck the pioneer family as John Forsyth died, reportedly of paralysis, at the young age of about 31. His was the second burial made on the property, on the knoll to the south of the tavern. By that time the family had grown by two more children, Sarah, born April 9, 1808, and Eunice, born December 29, 1810. After John’s death, Mary continued as the proprietor of the tavern. A new deed was cast for her by the Holland Land Company on July 13, 1813, granting her ownership over all of the land that she and John had purchased along the Ridge Road.

Later that same year, Mary and her young family had a front row seat to one of the nation’s earliest military events, as the Niagara Frontier, and the Ridge Road, became strategically important during the War of 1812.

On October 13, 1813, American troops crossed the Niagara River from the Village of Lewiston, which was at the terminus of the road on which the tavern stood, and began what would become known as the Battle of Queenstown Heights. It was the first major battle of the War of 1812 in which American troops invaded British Canada. Due to poor training and organization, the American troops were defeated on the shores of the Niagara River. December 10, 1813, American troops under direction of General McClure invaded Canada again, captured Fort George and burned the Canadian Village of Newark. This displaced about 400 women and children into the hardships of early nineteenth century winters.

The British retaliated for the burning of Newark by invading Niagara County on December 19, 1813, beginning a campaign that decimated much of the early settlement in Western New York. Under Colonel Murray, British forces attacked Fort Niagara, at the northwestern tip of Niagara County. Meanwhile, some one thousand British troops and a large number of Western Native Americans under the command of General Riall joined the troops at Fort Niagara. When the fort fell that same day, the British troops marched south to Lewiston. British General Drummond reported that “the Indians under intoxication had burned the great part of the houses at and near Lewiston. I thought it advisable to direct the remainder of them to be set on fire.”

Many accounts and books of the residents of Lewiston tell a gruesome tale of families being slaughtered, scalped and burned in their houses in the small Village of Lewiston. The refugees fled the village and were perused east along the Ridge Road. With no forewarning or time to consider, many families along the road joined the retreat from the frontier towards the larger settlements near the Genesee.
The frontier fugitives had such short notice of the attack that they left most of their possessions behind. In some cases the women tied their silver and other small treasures in bags and dropped them in the well or hid them in the nearby underbrush.

Orsamus Turner wrote,
“There was little warning, the Indians preceding the English soldiers swarmed out of the woods and commenced an indiscriminate shooting down of the fleeing citizens plundering and burning their log homes. Six or seven men and boys were killed and scalped.”

On Ridge Road, Tuscarora Indians who were friendly with the area settlers witnessed the flight of pioneers and the pursuing army from their reservation high on the banks of the ridge and took a stand against the invading army. They did not have the numbers to take on the advancing army and so they gathered the whole nation, men women and children on the escarpment above the ascending road. The men had all guns, the women each with a round stick looking like a gun barrel from below and a horn for every boy and girl. It was a big bluff but it held up the invaders for some time.

The Tuscarora then again stepped into the line of fire closer to the Forsyth’s Tavern even after their own village had been set to touch. Some men along with a few white settlers took a stand at a small arsenal of a dozen muskets and ammunition west of Howell’s Creek where they were able to gain time for the women, children and the old folks to get a safe distance ahead.

When those fleeing the frontier arrived at the tavern of Mary Forsyth, she sent her two boys to her father and brother in Genesee County, who had become guardians of her children after the death of her husband. Mary remained at the tavern, with five-year-old Sarah and nearly two-year-old Eunice.

The British continued onward only three miles east along the Ridge Road and upon finding both Howell’s Tavern and William Molyneaux’s Tavern empty, they proceeded no further. Mary’s tavern was the next place east on the Ridge Road, being only four and one-half miles from Molyneaux Corners. The remainder of Niagara County was abandoned and many of its residents would never again return. The U.S. Government officially counted twenty-one farmsteads burned during this invasion between Hustler’s Tavern in Lewiston to Forsyth’s on the Ridge Road. Continued raiding parties continued to burn settlements along the Lake Ontario shoreline.

Many of those who fled the Lewiston area reached the Town of Gaines, roughly thirty miles west of the tavern, on the same day. Residents of the Town of Gaines recount that the villagers from Lewiston passed through their homes with warnings of an invading army killing and burning everything along the Ridge Road. The residents at Gains decided not to flee but to muster a militia. It is said that all of the males over 18 living along the Ridge Road were gathered and under the direction of Captain McCarthy they proceeded single file west on the road by early daylight on Friday, December 20, 1813. They paused at the home and tavern of the widow Forsyth just before nightfall where the soldiers argued about whether to make camp or continue to the arms stockpile further up the Ridge Road. They came upon the tavern of William Molyneaux (originally that of David Klink) where some British soldiers and their Native allies had burned the barn and taken residence in the log tavern. In the dark, the militia stormed the tavern. Two British soldiers and one Native American were killed in the skirmish and the remainder were taken as prisoners. The militia later turned their prisoners over to the American army as it advanced from the south to scout the charred remains of the settlement at Lewiston. Twenty-one farms were destroyed on the Ridge Road between Lewiston and the Forsyth Tavern. The British continued to dispatch raids of approximately 15 men each throughout the Niagara Frontier to pillage and burn farms. Meanwhile an army of over 1,000 burned the village of Buffalo.

Every home between Lewiston and Warren’s Corners on or near the Lewiston Trail (Ridge Road) was deserted by the families and as far as Church Street they were looted and burned.

Settlers on the Lake Road and up to the east bank of the Eighteen Mile Creek to Can Horn’s Mill suffered the same fate so that the west half of Niagara County was almost depopulated.

Sergeant Ezra Warren, a native of Vermont, and his company were stationed at the Forsyth tavern. The plank road was completed and utilized as the main transportation route for soldiers and supplies. Ezra and his company were tasked with managing and protecting these transports as they arrived at the edge of the war front. The Forsyth Tavern was also used for a time to supply meals to the barracks at Hardscrapple (later known as Dickersonville, a hamlet roughly nine- and one-half miles west of Warren’s Corners on Ridge Road).

The barracks are estimated between various military letters to have been large enough to house up to two thousand men, with storage and a hospital. 500 men were listed at station there before the camp was burned by the British.
In April 1814 an American soldier, a member of our Frontier forced defected to the English station at York (Toronto). He reported that the only sites on the American side of the Niagara River were as follows:

“The troops on that line totaled 7,000 men, the 25th Regiment of 500 men stationed at Hardscrabble, 100 men at Black Rock, and 6,500 men at Eleven Mile Creek (Ellicott Creek, about a mile south of Williamsville).
“On the Ridge Road at Hardscrabble there is an arsenal, a log building containing 500 stands of arms deposited by the militia who were all dismissed on the 11th of April 1814. There is also there a quantity of ammunition and four wagon loads of entrenching tools. There are no field pieces.

There is a depot of provisions on the Ridge Road at the Widow Forsyth’s. It consists of beef, pork, whiskey and flour of all of which there is a large supply. There is a road leading from the mouth of 18-Mile Creek on the west side. The distance is 10 miles but the road is very bad. He thinks there is at least 2,000 barrels of provisions at this depot.”

​July 1813, Ezra and Mary are believed to have been married. The War of 1812 was ended by the Treaty of Ghent, signed on Christmas Eve, 1814. The settlement stipulated that captured territory be returned to the status quo ante bellum, meaning that the British would remove themselves back across the Niagara River and settlers could return to their lands and reestablish the Niagara Frontier.
Back to Map